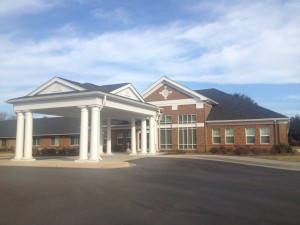 In 1938, the members of Christ’s Sanctified Holy Church purchased land near Perry, Ga., and created the CSHC Campground. The Campground was purchased, in part, so that a home could be established for the older members of the church. The CSHC Old Folks Home first opened its doors in 1939, and soon after that the facility began accepting senior citizens from outside the church community.

The original “Old Folks Home” was actually a converted farmhouse that was built around 1800. That home was destroyed by fire (without injuries), and a new building was constructed to serve as the Home For The Aged.  The new building officially opened on July 4, 1960, and included 39 rooms and a central dining room. Later that decade, the home became a state recognized facility that hosted Medicaid patients.

Over the years, there were changes in state regulations, causing the home built in 1960 to become obsolete, so in 1989, the church built a new nursing home facility, which is the current facility consisting of 51 beds. A church sanctuary was added to the building in 1995, creating a place for the residents to come and worship together.